It was the closing reception for Academic Assembly 2017.   A server offered a tray of breaded appetizers to my new acquaintance and myself.  When he asked if the appetizer was meat or vegetable I asked, “Are you vegetarian?”  He responded, “No, Muslim.”  At that moment I realized that even though I had been working on wellness and resilience issues I had avoided an important areas of wellness- spirituality.  Sidelining religious practices was easy for me as I had no internal struggle requiring a choice or being vigilant regarding my beliefs.   This was, and is, not true for all my colleagues.   Clearly for some, a usual academic conference interferes with their faith practices.   Checking my understanding, another friend confirmed my new revelation stating, “I’d love to go to a conference in which it was comfortable to practice my religion.”    ……Loice Swisher, MD

With the increasing national focus on physician burnout, many academic conferences have incorporated a variety of “wellness activities” such as relaxation, mindfulness, yoga, fun runs, and massage into the official program schedule.   Of the seven “wellness dimensions”, one aspect is virtually always ignored- spirituality. However, personal spiritual practices such as prayer, food restrictions and schedules may be conflicted, even suppressed, during meeting attendance.   The CORD Resilience Committee wished to evaluate potential considerations for future conferences to allow for increased personal spiritual wellness during the meeting.

Since there is no data regarding the impact of meeting attendance on personal spirituality, CORD members were surveyed through the CORD listserv about their perceptions of the importance and conflict with spiritual practices at national conferences. The survey served as a needs assessment for a prayer room.

Just over 10% of the membership responded with nearly all agreeing that they considered themselves spiritual. Demographically, 58% of the respondents identified as Christian, 22% as no religion and 12.5% as Jewish.

Regarding spiritual practice/meeting attendance, 22% of respondents reported a conflict.  Interestingly, almost all those who experience conflict identified as Christian or Jewish however this may reflect the exceedingly small number of respondents of other faiths. 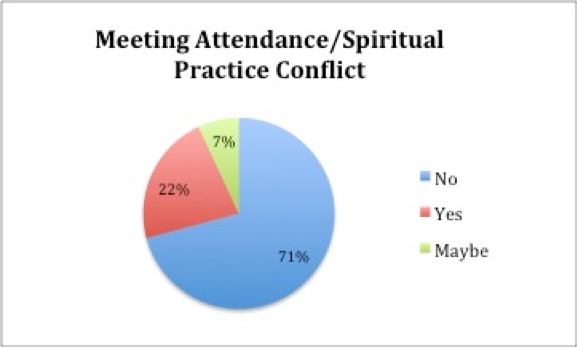 The top three conflicts were: timing of events (81%), prayer (14%) and food (12%). A spiritually embracing conference would positively alter the conference experience for 26% of the respondents with 12% interested in finding others of their faith and 10% interested in a prayer/mediation room.

The comments were mixed with three people pleased that this topic was being addressed, two people asking a way to attend Catholic Mass without missing conference time.  Conversely, two people felt that this was overreaching or the need to maintain a “separation of church and state.”

Academic conferences are increasingly responding to attendees’ needs and concerns that extend outside the didactic presentations yet affect an individual’s meeting experience.   In October at the 2017 ACEP Scientific Assembly conference, a breast pumping location, AA meetings, and a prayer/meditation room were made available to all attendees.   Obviously not everyone will want or need such accommodations.  For those that do, the attention to their needs is often greatly appreciated without detracting from the experience of other conference attendees.

In San Antonio, there will be a prayer and meditation room open for attendees.  The hope is that this will give a space for those who find resilience in these practices to be comfortable and well.